Commodites Can Affect The Price Action Of the Stock Indexes 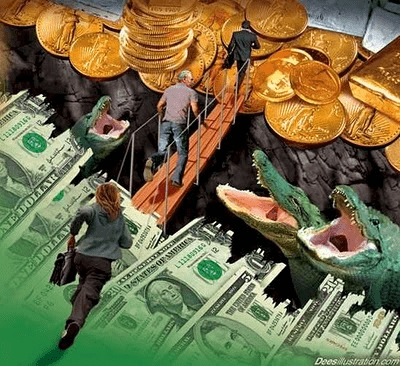 While we want to start off by making it abundantly clear that you should not enter trades based solely off of these facts, it is important that you understand that commodities can affect the price action of the stock indexes.  While this may seem impossible or strange to someone that is not familiar with how the markets operate, understanding how the price of one commodity may affect the price movement in another market is definitely important to know if you plan to make a living day trading.  More importantly, since we concentrate on teaching people how to use price action trading strategies to trade the ES, you should have a good understanding of how the dollar index can and does affect the prices of stocks and the stock indexes.

What you should understand is that when the dollar is rising on a consistent basis, that most stocks and certainly the stock indexes will decline or at least be range bound on a consistent basis.  In reverse, as the dollar index is falling consistently, you will find that stocks will rise for the most part.  There are a couple of different reasons why this is the case, and we won’t discuss them all, but we will talk about the main reason we think that this happens.

Probably the most important reason this inverse movement occurs is due to money flow.  The dollar is still considered the most stable currency in the world, although that trend may be coming to an end in our future.  For now though, the dollar is still considered king, so in times of concern, money flows into the dollar and out of assets such as gold, oil and stocks.  For the past few months, the concern of a collapse of the Euro has been very real, so the dollar has started to see an inflow of investments, rather than the outflow we have experienced over the past few years.  As long as the dollar continues to rally, it is very likely that investors will continue to flee stocks.  A rising dollar is also seen as being deflationary, so this also causes our American companies to lose value, thus causing more downward pressure on stocks.

Last week (week ending 7/27/12) we saw two big sell off days in the US dollar index, and subsequently, we saw the stock indexes rally strongly on Thursday and Friday.  If the dollar continues to sell off, the trend will escalate and more money will begin to flow into stocks and probably into gold, silver and possibly oil as well.  The biggest issue we see coming is a no win situation in which no matter how well the federal reserve tries to balance the economy, that they are in a losing situation in which the dollar is going to lose value and start trending lower again.  When this begins to transpire, stocks, metals and probably oil will all be seen as safe havens in which they are the only place your money will be somewhat safe and likely to bring in decent returns.  We suggest gold and silver and believe that we may be on the verge of some of the greatest opportunities ever in the metals.  Of course, if that predication comes true, then the benefits of investing wisely may be overshadowed by the obvious negative factors that are soon to follow.

Here is some more information on the inverse relationship of the dollar and other commodities that we found at www.minyanville.com.

The Federal Reserve, through its various monetary mechanisms, has a major impact on the value of the US dollar, and over time, has destroyed the purchasing power of the fiat base currency used in the United States.

Interestingly enough, the following quote comes directly from the Federal Reserve’s website regarding one of its primary mandates: “In setting monetary policy, the Committee seeks to mitigate deviations of inflation from its longer-run goal and deviations of employment from the Committee’s assessment of its maximum level.”

In light of the longer-term malaise seen above, the Dollar Index futures have recently rallied sharply higher as Europe continues to flail in a slow and agonizing decline that will ultimately lead to a complete fiscal disaster.

Sovereign debt concerns continue to mount regardless of what the European technocrats spew publicly and the US dollar has been the primary beneficiary of these seemingly growing concerns.

This brings me to the purpose of this article. Most of the articles I write are focused on option-based trades, but I decided it was time to put forth a more comprehensive scenario that could unfold over the next few years as a result of excessive monetary stimulus through various quantitative easing mechanisms developed by the Federal Reserve Bank.  “A mild change” to say the least….

As discussed above, the US Dollar Index futures have moved higher throughout most of 2012. Any significant increase in the US dollar is a growing concern among central bankers as it correlates toward deflation. Deflation is the Fed’s biggest enemy — besides itself, of course.

This week the Federal Reserve will release statements relating to the economic condition of the United States. Furthermore, the Fed also will discuss if it will initiate another dose of monetary crack for a capital marketplace that is addicted to cheap money and zero interest rates. At this point, the so-called marketplace is the antithesis of free by all standard measures.

The US Dollar Index futures are in an uptrend that dates back to mid 2011. The orange line illustrates the uptrend and represents a key price level for the US Dollar Index. For those unfamiliar with basic technical analysis, the rising orange trendline will act as buying support until the dollar eventually breaks down through it, signaling the bullish move higher has ended.

This brings us to a rather interesting potential observation. Recently, Mario Draghi, Chairman of the European Central Bank, made public comments regarding the readiness of the ECB to act if need be to safeguard the European Union. The Dollar Index futures plummeted on the statement and remained under selling pressure most of the trading session on Thursday.

If a mere comment from the ECB can have such a damaging impact on the valuation of the dollar, what would happen to the dollar if the Fed initiated a new easing mechanism?

The answer is simple: The US dollar would immediately be under selling pressure. Selling pressure in the US Dollar Index generally leads to a rally in risk assets such as equities and oil futures. Over the longer-term, a weak dollar is also positive for precious metals and other hard assets.  You can read the rest of the original article here.

We believe that the only way anyone can consistently make money in the markets is by learning to read a price chart.  Anyone that is making money as a day trader on a consistent basis has basically learned the skill of price action trading, which is nothing more than learning to read price action.  Some of these profitable traders may not even call it price action trading, but regardless, they are able to read the chart and successfully predict where prices are going in the short term based on this skill.  If you want to learn how to read a price chart, then you have come to the right place.  Just make sure that while on your journey to learn how to trade with price action strategies, you understand that commodities can affect the price action of the stock indexes.  You can get more information on how to trade with price action by visiting http://priceactiontradingsystem.com/pats-price-action-trading-manual/.