Is Market Geometry Real And Does It Affect Price Action 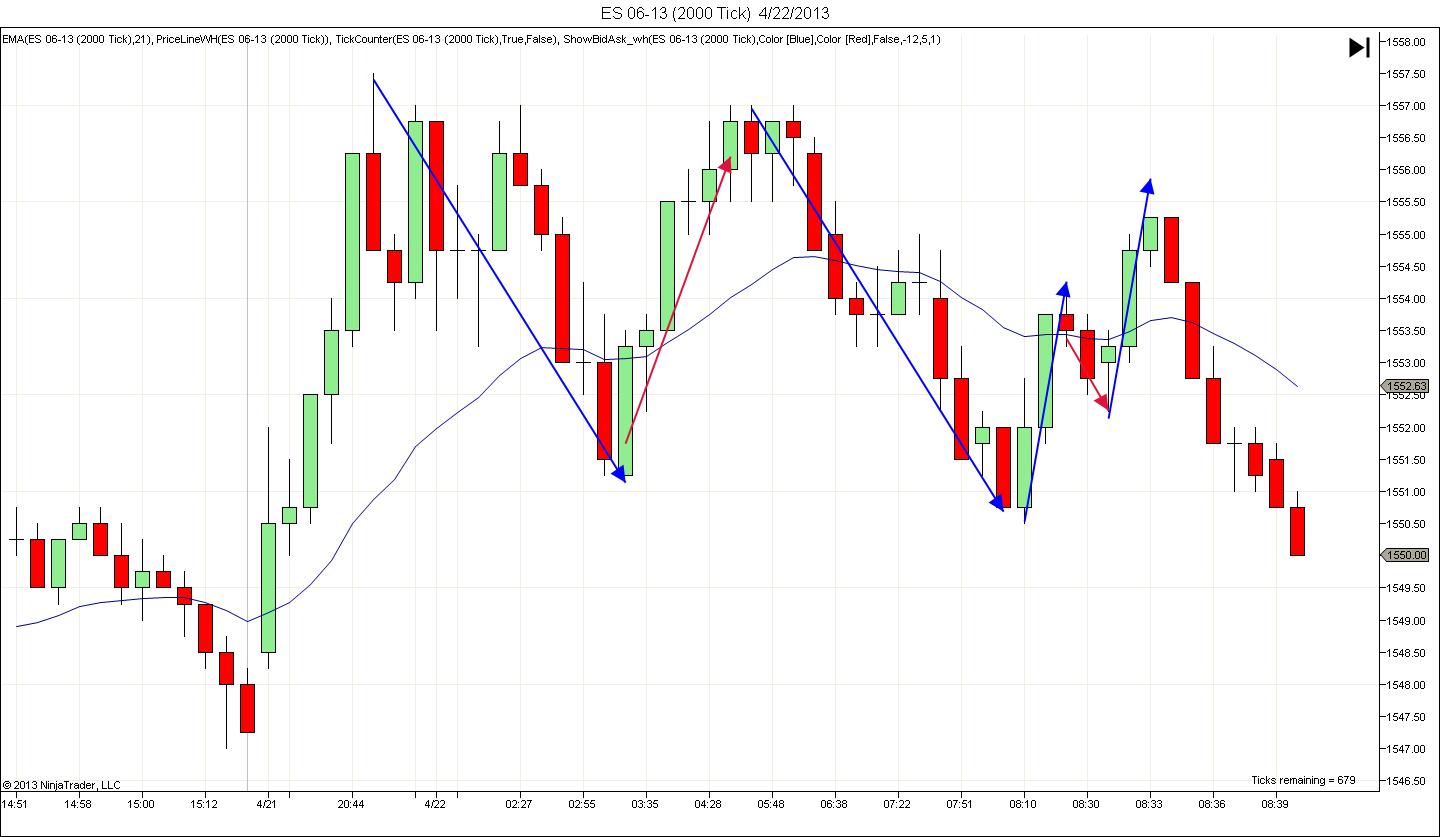 If you follow our price action teaching or read our articles here regularly, then you have probably heard me talk about measured moves, which are very common in the market.  What many people don’t really understand is that the markets move in two’s very commonly.  Like anything in trading, nothing is ever written in stone, but the rule of two’s happens more often than it doesn’t happen, so understanding this rule and knowing that it is real is step one.  As an example, if you get one leg of movement in move down, you will normally then get a correction, followed by another leg or move down that is equal in length and often equal in time and bars as well, although the time and bar equation is less reliable for certain.  Below is an example of a couple of measured moves from a recent chart.

Notice the blue lines first, as those are the two measured moves, or two measured legs.  The red arrows in between are the correction that forms between the two moves or legs as we call them.  The larger two legs are a really good example and shows how an almost perfect measured move will look, as they are almost identical in length, time and number of bars.  I actually drew the blue line on the fist leg, then copied it so that it’s exactly the same size and angle, and then pasted it for the second leg, so once that second leg started forming, I had a good idea where that next move down was headed, and it was almost a perfect measurement and target, with prices missing the target by a single tick. While I didn’t note them with any arrows, notice that the second move down also had two legs within it as well, and they are equal length with a small correction separating them as well, so a smaller measured move within a larger leg or move!

The next example over (still on the same chart) was a smaller upward move, but again, it consisted of two legs or two moves, and the second move missed it’s target by only a single tick and held the exact number of bars as the first leg or first move up.  Both legs or both moves were separated by a small correction which is a key ingredient to finding these moves and I noted the correction with a red arrow.  If you get out your charts and start studying them, you will see these measured moves over and over.  It’s the same on any time frame, so it won’t matter if you study a 5 minute, daily or monthly chart.  This is why price action is universal and why it works on any chart and any time frame.  Once you learn how to read a price chart, you can use that knowledge in any market and on any time frame to help you understand what prices are doing and where prices are probably headed next to a very accurate degree.

If this is new information to you, then I am hoping you can see how there is so much more to learn about price action and price movements than you might have really understood previously.  However, there is even more that you should know and understand about market geometry.  Once you find a valid trend line, you can almost always copy that line and move it to the other side of the trend and find a channel, and prices will go from the trend line, to the channel line and undulate back and forth as it continues to trend.  If you can find these channel lines, then you will have a much better understanding of where prices are headed and where they will likely turn.  Once again, we are just using market geometry to help us determine what I call “key entry points.”  Key entry points are simply areas where we will be expecting a reversal and a place where a great trade entry is likely to set up.  Below is an example of what a channel will look like.

In each case with the channels drawn in the example above, the lines on the top and bottom are of the exact angle.  I simply found one side and drew the first line, often you find the line on the trend side, but other times you find it on the opposite side of the trend.  Once you find it on either side, just copy it and move it the other side and a clear and precise channel will often emerge.  Prices will continue to move from one side of that channel to the other until the trend ends.  We won’t discuss how to determine when the trend is ending today, as there isn’t time and space, but be sure you notice the blue circles I drew on each trend line.  Those are the key trade entry points I spoke about earlier.  Look at what would or could have happened if you had entered with the trend each time prices came back to those trend lines.  We only trade with the trend, even though there are often great set ups off the other side of the channel, but counter trend trading will break you and make you a losing trader, so only trade with the trend.

Hopefully you can see the value of these channels, but if you use the channels and then also look for the measured moves within them, you will have a better idea of where your second leg or second move might be headed longer term, thus finding yourself a very reliable target in many cases.  If nothing else, you enter on reversals off of the trend line, and exit with your profits when prices touch the other side of the channel.  So now that you have read this article and studied our examples, what do you think?  Is market geometry real and does it affect price action?  As we stated before, we think market geometry and price action are interrelated, so really they are one and the same in our opinion.  If you would like to learn more about market geometry and how we trade with price action, you can find that information at http://priceactiontradingsystem.com/pats-price-action-trading-manual.