Using Trend Lines To Help You Read The Price Action 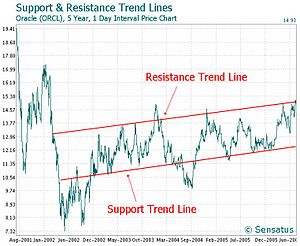 You should also understand that once you find a trend line, you can normally copy that trend line and then move the copied trend line to the upper side of the price action to form a channel, and that upper trend line or trend channel line as I like to call it will help you determine where the trend will likely begin its next correction.  Here is what Al Brooks had to say about micro trend-lines in a recent trading article that we found at www.futuresmag.com.

Everything on a price chart represents either a trend or a non-trend. Non-trending swings are trading ranges, and non-trending bars (bars with small or non-existent bodies) are dojis. When the market is in strong trend mode, look for setups to trade with the trend, such as buying near the high of the swing. Don’t place counter-trend trades in a strong trend. When the market is in a trading range, that is the time to look for counter-trend moves.

One of the most useful techniques involves what happens during a breakout. A price action trader rarely enters on a breakout to a new swing high or low because they’re always looking for the earliest possible entry to minimize risk (see “Price action fundamentals”). This usually means entering on some minor pullback before or after the breakout.

For example, if you just bought a flag breakout before a new swing high, sell part of the long to the breakout traders who are getting long at the new high. Don’t buy at a price where people are taking profits on their longs because then the risk of failure is too great; too large a stop would be needed, and you would have to trade fewer contracts, limiting flexibility.

Two of the most reliable entries are failed breakouts and breakout pullbacks because both involve trapped traders who will be forced to liquidate and move the market in my direction.

If within a bar or two of the tentative failure, the market again trades one tick below the low of the prior bar, then that failed breakout has also failed. This scenario is called a breakout pullback. Because it is with the trend (in the direction of the trend that led up to the pattern) as well as a second attempt, it is a very reliable signal.  You can read the entire original article here.

We think that Al Brooks is a brilliant price action trader.  Our only knock on Al if you can call it a knock is that his writing is difficult to follow for new traders.  Other than that though, he seems to know and understand price action very well.  We teach you to use second entries, which he seems to know and understand very well, although he calls them “second attempts.”  All the same, they are one and the same pattern, although we have some rules written around our second entries that might be slightly different than what Al teaches.

If you are interested in learning basic price action, particularly when it comes to using trend lines and minor trend lines, or as Al calls them, micro trend lines, then you can learn the basics by reading our price action trading manual that is located at http://priceactiontradingsystem.com/pats-price-action-trading-manual/.  This manual was written by our head trader Mack, and he has taken price action and broken it down into plan English so that most any newbie can begin to learn how to read a price chart.  If your goal is to become a successful day trader, then you need to read PAT’s Price Action Manual that was written by our master trader Mack!  Remember, it’s important that you begin using trend lines to help you read the price action, so no matter what your stated goal, spend some time learning our basic use of the trend line when it comes to your price action day trading strategies.

Be sure to watch the video below to see an example of how we use the upper trend channel to take a counter trend trade.  We don’t recommend that most traders take counter trend trades until they are seasoned price action traders, but we wanted you to see the importance of the trend lines.