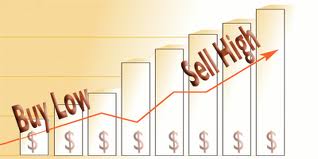 I’m here to tell you that these two trading terms are very closely related and I’m also going to tell you that the ability or skill of buying low and selling high is one of the most important pieces to becoming a profitable trader, but it is one of the hardest and most misunderstood pieces to the trading puzzle as well.  Common sense tells us to wait until prices are moving in the direction we plan to enter, but by the time most day traders realize which way prices are going, it’s already too late to enter in that direction.  The key is learning to identify the tops and the bottoms of the swings and enter in the opposite direction with precise timing just as the reversal is occurring.

Buying the lows of swings and selling the highs of swings is the only way to buy low and sell high in the long run, but how do you do this consistently and how do you know that prices are about to turn?  This is where learning to read a price chart becomes the key ingredient, so this is why price action trading is so important, because if you truly know how to read a chart, you will be able to determine the general location of the next turning point of the majority of the swings on your trading chart.  Is it easy to learn?  Not always, but it is a teachable skill that most anyone can learn if they spend enough time and get enough practice with it.  Most people do not learn it overnight, and the majority take months or years to learn it, but understand that it can be learned.

I received an email from a trader just recently and the trader told me that he was improving with his trading and that he was getting to the point where he could tell where the swings changes were going to occur, but that he was having problems trusting what he was seeing, so he normally would not be able to pull the trigger and enter the trade. Basically he would watch the trades happen without him, until he could not take it any longer, than he would take a hasty entry, just as the trend was reversing.  Does this sound familiar to you?  In the end, the trader was selling low and buying high from a lack of confidence.

I received another email with an attached chart that was marked up with trade entries from a different trader about a week ago, and he had marked several trades, most of which were losing trades.  What I noticed immediately was that he was entering too late into the move, and most of the move was over before he was entering.  Just as he would enter, all of the strong handed or smart traders were taking profits, and he was simply offering them an exit order, and prices would quickly begin to turn after he had entered the trade.  The bottom line is that this trader was “buying high” and not “buying low!”

While both traders in the examples above were guilty of buying high and selling low, it was for different reasons.  Trader one was seeing the set ups, but lacked the courage to enter, so it was a mental or psychological issue with his trading problems.  Even though he was able to read the chart fairly consistently, he couldn’t bring himself to enter for fear of losing money.  The second trader simply was not reading the chart properly, but had no problems entering a trade, so his problem was more “skill” related when it comes to reading a priced chart.  Even though both traders were losing money for different reasons, the end result is that they are guilty of the same mistake which is buying high and selling low.  They both must learn to buy low and sell high before they are going to become profitable.

See if this scenario does not sound familiar to you.  Prices are slowly trending higher and higher, and you keep watching them go higher and not certain as to what you should do.  After about the third or fourth move up, you finally decide that you can’t just watch prices go without you any longer and you decide it’s now time to buy.  The market has been strong and it’s been steadily going higher and higher, so you know you should get long and you place your long buy order just above the last swing high.  You tell yourself that if prices break higher, we should make another move higher and you will finally join in the trend and get your piece of the profits.

However, just as soon as your order is filled, you notice that prices don’t shoot higher this time.  Instead, they moved higher through your order only momentarily, and were then quickly dropping a few ticks lower.  You tell yourself this is just the normal swings in the market and it will take off higher very soon, but no!  Instead, prices are picking up speed to the downside, and they are now against you by a couple of points, but it appears to be losing momentum, so you will hang on a bit longer.  Slowly but surely, prices get almost back to even, and then the bottom falls out again and prices are racing lower and you decide that you entered in the wrong direction and reverse with a 4 point loss.

However, no sooner than you reversed to the short side, prices are turning up again and now are moving steadily higher, and right back to the place where you had originally entered long.  You ask yourself what is happening and why are prices now going higher again.  Before you know it, you are down another 3 points so you close the short trade just before prices rocket even higher.  If you would have just stayed with your original long trade, you would be up 8 points instead of down by 7 points.  What just happened and how did I lose 7 points in a few minutes while prices are now once again trending higher like before?  Guess what?  You are a victim of buying high and selling low, and until you break this bad habit, you will never make money as a trader.  It doesn’t matter what is causing the problem, you must correct it and learn how to buy low and sell high.

If you are still wondering how does price action trading relate to buy low and sell high strategies, then you need to read this post a few more times until it all comes together for you.  If your problem is a lack of chart reading skills, then you need to check out our price action trading manual at http://priceactiontradingsystem.com/pats-price-action-trading-manual/.  On the other hand, if you can actually read the chart but you do not have the courage to overcome your fear of losing money, then you have to get on the simulator and start trading until you lose your fear.  Greed causes the problem of chasing the market and fear causes the problem of not entering early in the trend.  It is fear and greed that will push you to buy high and sell low, so learn to read a price chart first and foremost, and then follow that up by trading the simulator until you can overcome the fears that are keeping you from entering your trades and the right moment.

Be sure to watch the video below, as it will show you exactly how to buy low and sell high with many more details.

This is the best advice on trading that I have seen in a long time. Thx for making it so blunt and clear.