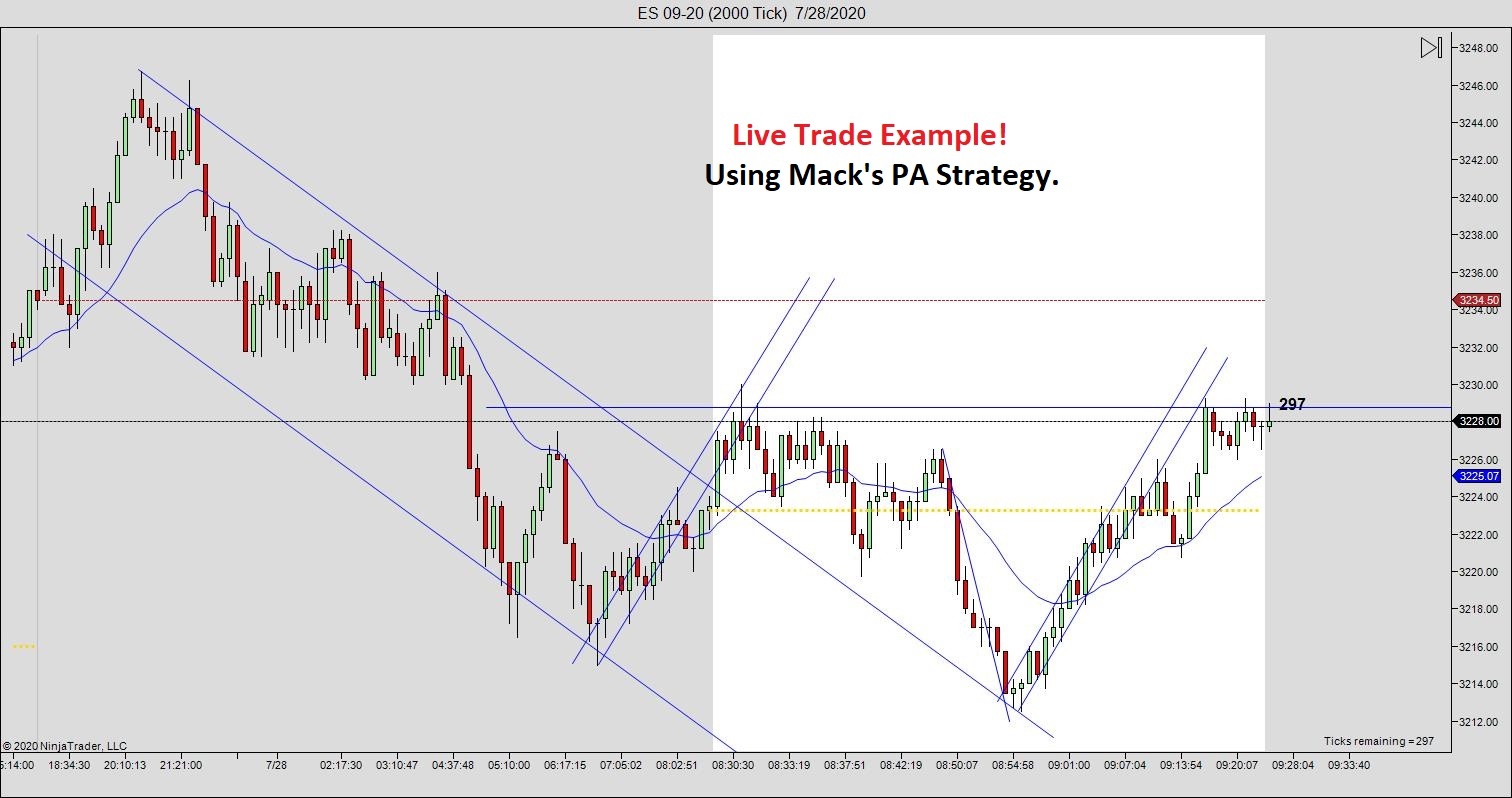 This is a student submitted live trade by Juan. This is a second entry long with a 3 point runners as well. This is an interesting trade, because I talked about the mid line in Wednesday’s chart lesson. You prefer to see the mid line hold a few times before you take a trade off of it, and even then, you want a solid second entry set up with a good signal bar.

In this case, there is actually an engulfing bar, although Juan waits for it to close and enters one tick above the signal bar. Since it was an engulfing bar, if you like the set up, you could actually enter one tick above the bar to the left of it as the engulfing bar broke higher above it, and that would have given you a 2 tick better entry price it appears. Nothing wrong with waiting on the signal bar to complete here though, I just wanted to point out the option to enter a few ticks earlier if one so desired.

Juan scalps out on one contract, then gets a three point runner on the second contract. He exited at the top of the channel, which is exactly how I would have played that trade as well. This was a nice trade and thanks to Juan for sharing it with us.

Nice one! I saw this second entry this morning with those 2 clear legs down but missed it based on how I I had my uptrend channel drawn. I was kind of disoriented (wasn’t sure had my channel rght). For example, I had an undershoot where you have the overshoot so my 2nd Entry triggered in no man’s land and the undershoot made me believe we were going to get the break.

Nicely done mate. Nailed the timing on that runner.

Kudos! Very nice call on the runner too!

Love it. Thanks for sharing

Congrats! Well done. Thanks for sharing.

IMO Juan has the trend channel drawn too low. I took this same trade this morning and that engulfing bar bounced off of exactly where I had the trend line drawn so he does unknowingly get in at a key entry point. He also exits early because the top of the channel is drawn too low, nevertheless a nice trade.

Thanks Juan! Love seeing traders live trades! Well, Mack’s too, but now seeing more of other live trades. 🙂 I find it so gutzy for a 3 pt. stop for a 1 pt. target. Can’t do with a small account, but good to see your success!

Isn’t scary to move your Limit Stop like that… its good thing it did not went down farther.

I took that same trade, but I wasn’t willing to move my stop, so I just waited and the next bar was much more bullish.