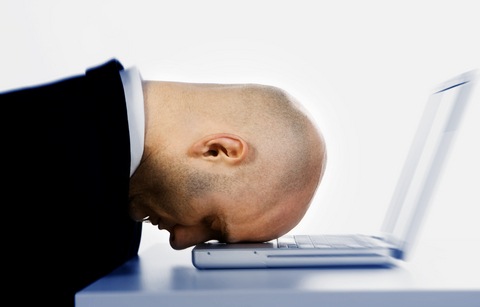 One of the biggest problems new traders or even unprofitable traders face each day is information overload.  When you combine this information overload with the belief that indicators offer some type of magical entry formula, all you really get is confusion, which leads to losses.  It’s important that you understand that less is better when it comes to day trading.  You can actually reduce information overload by using price action trading strategies.

I know this for a fact, because it used to happen to me.  I would read up and study some sure fire trading strategy, which usually included the use of one or more indicators.  In the end, I would look at the chart, and then look at my indicators.  One indicator would look great for a long entry, while the other wasn’t showing anything or even worse, it was showing a short position.  This would simply lead to adding another indicator to help clarify the confusion, and once again, it would give another conflicting signal.

In the end, I had no idea what the chart was telling me at all, and I had nothing but confusion in regards to what the indicators were telling me.  By the time I would make up my mind to enter a trade, it would all be over and things would be changing.  It wasn’t until I learned how to read a naked price chart that I really discovered just how wrong I had been in trying to trade with indicators.  If you learn to read a price chart, you will understand what is going on in front of you with prices, and even better, you will have a much clearer perspective of where prices are heading next in the short term.

If you are using anything but a single chart to read the price action and trade from, then you are likely suffering from information overload yourself.  This is a common problem for new and unprofitable traders, so you are not alone if this sounds like one of your hold ups in reaching profitability in day trading.  You don’t need an expensive set of trading monitors and you don’t need the holy grail of trading indicators to make money while day trading.  These items will do nothing more than complicate your trading and make it harder for you to learn the one key way that you can actually make money as a day trader, and that’s by learning to read a price chart.

Below is an excerpt from an article that we found at www.thefibdoctor.com.  Here is what they had to say about information overload and day trading success.

Dave, this is Brian. You gotta come over here and check out my new set up.” Brian is my neighbor and he started trading about a year ago and like so many of us he has struggled to keep his head barely above water. We were talking a few weeks back and he was telling me he was gonna have to stop trading and get a second job to catch up his mortgage and car payments. Brian was trading part time and working full time and losing his butt. Sound familiar ? Anyway, he sounded like a kid in Junior High with a new girlfriend on the phone so I told him I’d scoot over there right now. I figured he had bought one of those 60 inch plasma TV’s with the Dolby® surround. I was kinda excited too because now I could watch my NASCAR races at his house !

Brian’s office/den/playroom is a converted basement with an entrance off the driveway so I let myself in. “Hey man, where you at?” I heard him holler through the closed door “in here Dave” so I open the office door and there it was. Holy freakin’ #$%^! Un_freakin_believable ! Brian’s father was retired from NASA and I thought surely they had set up a space shuttle command center. There were at least 2 computers that I could see and one, two, three, four, five, six monitors! Every monitor had some kind of chart running in it. I saw time and sales windows, market breadth, TICK, TRIN, VIX, BANK, TRAN and on and on and on. Brian was smiling like a rat in a cheese factory.

Now at this point, I’m really confused. Just a few weeks ago Brian told me he was gonna have to stop trading and maybe get a second job to catch up his mortgage and car payments because he was losing so much in the stock market. Now I’m standing in his “office” looking at a 6 monitor set up that looked like something you’d see on the floor of the New York Stock Exchange. Ok, there’s only 2 possibilities here. Either Brian made a ton of money in the stock market last week or he wanted 6 monitors so it would be easier to see how much money he was losing. So I asked him what the deal was with all the new stuff. His reasoning was that he could trade better if he had more information and for that he would need more monitors. Well, me and Brian had a “come to Jesus meeting” and Jesus wasn’t there ! For those of you not familiar with Southern terminology that means we had a really heated discussion LOL!  You can read the rest of the original article here.

This was a particularly interesting article, so be sure to click over and read the entire thing.  I thought it was a great piece, because it reminded me of my early days of trading.  I only wish I knew then what I know now, and that’s the fact that all you need to make money while day trading is a single screen, with limited information.  The only way to actually make money in the markets as a day trader is to learn how to read a price chart, so stop wasting your time with the expensive toys and worthless indicators.  Learn how to read a price chart properly and you will at least be on the correct path to becoming a profitable day trader, but best of all, you can reduce information overload by using price action trading strategies that actually work.  Learn how you can become a price action trader by checking out our information at http://priceactiontradingsystem.com/pats-price-action-trading-manual/.