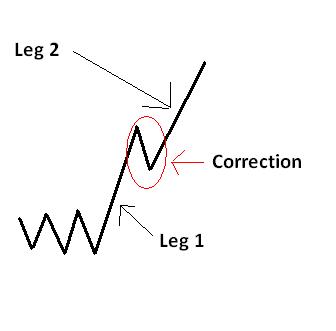 For some reason, many traders tend to get tripped up when they study our techniques on second entries using our price action day trading strategies.  While they are very simple in concept, second entries are very hard to describe and put into words.  Because they are difficult to describe, many people can’t seem to grasp them easily.  In this article, we are going to attempt to describe them more clearly, but most importantly, we will include a video demonstration so that you can get a better grasp on understanding second entries with price action trading and see them in real time as well.

I believe that another reason that so many traders struggle to clearly grasp second entries is because they simply can’t understand how simple that they really are in reality.  They work so well and add so much success to our trading, that many traders think they must be very complicated patterns that are very difficult to learn.  In reality, they are so simple that it’s much like the old analogy of missing the forest for the trees type of thing.  If you haven’t heard me say it before, you will definitely hear me say it on occasion if you follow our website or our video lessons.  It is very important that you understand that the market moves in twos.  If you see one clear leg of movement in any particular direction, you will then see a correction or pullback, followed by another clear leg of movement, so you actually get two moves and these two separate legs will often be of equal or very near equal length.

I’m including a picture example (of what I just explained in the paragraph above) just below.  Take a look at the picture and study it while reading the description or paragraph above until it makes sense to you.  Notice the example and how there is one large leg up, followed by the correction in the red circle, then a second move up that is of similar length.  This is the two legs I spoke about, and you will see the market do this quite often, because it tends to move in two’s.  By understanding this, we can take advantage of that knowledge and use it to our benefit when day trading.  These moves of two’s are particularly important when a market is trending, because we watch for corrections in the trend that consist of two legs.  Once the second leg completes, then the trend will usually resume again and that’s where we want to enter our trade in many cases.

When you see a two-legged correction that pulls back to the 21 bar EMA or a proven trend line when the market is trending, these trades are one of the strongest and most reliable patterns that we teach.  A person can actually make a living trading this single pattern alone, and we probably make more money off of this single pattern than any other.  When I teach this trade to new traders, they are usually astounded that they have never heard about it or even recognized it on their own before.  I have had traders that traded unsuccessfully for years that look at the charts every day, yet they don’t realize how often the market trades in two’s and how strong this two-legged trading pattern actually is for making money.  One of the major reasons is because it is so easy, and it doesn’t seem difficult enough to be possible.  In the end, people just don’t spot it because it’s so uncomplicated.

When the market is trending, these two legs won’t always be of equal length, so they often aren’t quite as easy to spot as the example above, but all the same, two moves in the opposite direction of the trend are still a two-legged correction, which signals two attempts to go counter trend that fail, thus reversing the market back into the direction of the prevailing trend or bias.  Once you understand that if the market attempts something twice and fails, it’s likely to move much further in the opposite direction, then you will understand why these patterns work so well.  Think about double bottoms and double tops as well, because that often helps people to visualize what’s happening.  Most everyone knows about double bottom and double top patterns.  A double top is two attempts to go higher that fail and reverse the market to the downside, and a double bottom is two attempts to go lower that fail and reverse the market to the upside.

These two-legged corrections (or second entries) might actually form a double top or double bottom, but normally the second leg will be slightly shorter or slightly longer depending on the direction in which they form, so they don’t stick out as easily as a pure double bottom or double top.  When it comes to the markets and prices though, close is usually good enough, and these patterns will often look very close to double bottoms and double tops, so think like that if it helps you to visualize the two legs.  Either way, you must first understand that the market does indeed move in two’s, but more importantly than that, if the market attempts something twice and fails, it’s very likely to succeed in moving much further in the other direction, so knowing this gives you an advantage over a whole lot of traders.  When you throw this fact in with the fact that you are looking to enter “with the trend, ” you really increase the odds of you entering on the right side of the market, which increases your odds of making money!

If you are interested in learning more important patterns and price action rules such as this, you can find that information in our price action trading manual.  You can find that manual at http://priceactiontradingsystem.com/pats-price-action-trading-manual.  This manual is straight forward and will explain many important features that many simply never recognize when learning to day trade.  What’s really exciting is that price action works in any market and on any time frame, so it’s universal to price charts.  Be sure to watch the video below so that you can get further clarification in understanding second entries with price action trading.

My question are regards to second entries with PA

What are the lowest time frame window that you can suggest

Mack,
Great lesson, your program got me hooked, been struggling, over a week, with the legs and counting and its been confusing. Your Video and instruction put me over the top, I’m stoked and blown away, you made it so simple. Thank you. Don

Hi Mack
As a fan of Al Brooks I must admit I find your approach more accessible and doable! Just wondering, does your method work best on shorter time frames. I usually H4 or H1, but wondering if M12-M20 might be better for the system dynamics, entries and keeping losses smaller and more entries. I am a fulltime trader from Australia but needing updating my skills!
Regards Andrew H

I assume you are using Brook’s terminology and I am not familiar with it enough to know what a H1 or H4 is unfortunately. I assume you are asking about a 1 or 4 hour chart? We use a 2000 tick chart and not a time based chart.

Hey Mack,
I’m sorry to bother you again again, I can’t see the video.
Thanks.

This was corrected, so you should be able to view the video now.

Thank you for your daily explanations. At 6.07 I don’t understand a second entry high. I see a small red bar closing below the former one. The nxt one is a big green bar and I guess is the second entry H. Are you entering with a stop above the close or at the market when it develops?